"The outcome of the referendum on Britain's relationship with the European Union will have a profound effect on the lives of today's 16 and 17-year-olds. It is only right that they should have a vote" said Jonny Oates, former deputy communications adviser at 10 Downing Street and chief of staff to the Deputy Prime Minister, speaking at the launch of the local Liberal Democrat party’s Votes at 16 campaign in Whitfield on Saturday (7 November).

Liberal Democrats in the House of Lords have tabled a cross-party amendment calling for 16 and 17-year-olds to be granted the right to vote in next year's EU referendum. Lord Oates was speaking advance of a vote on the amendment taking place on 18 November.

"This is really important. We are the generation that is going to have to deal with the consequences of leaving the EU, not the 70-year-olds who can vote" said Flo Anderson. Flo will be 16 in April so under current rules will not be allowed to vote in next year's referendum.

"Votes at 16 would inspire more of us to get interested in politics and want learn more about it at school" said Alexander Karpetas, 16, a pupil at Duke of York’s Royal Military School in Dover.

"The Liberal Democrats have long battled for votes at 16, it is an age in which you take on a host of new adult responsibilities yet have no voice in the running of your own country"  said Sarah Smith, Liberal Democrat Parliamentary Spokesperson for Dover

"The case for the 16-year-old vote was well and truly won in the Scottish Referendum. Sixteen and seventeen year olds like Alex and my niece Flo must have the chance to vote in the EU referendum. The outcome will have a huge effect on their future lives."

Liberal Democrats are urging local people of all political persuasions to sign up in support of Votes for 16 here http://ek.lib.dm/P52l 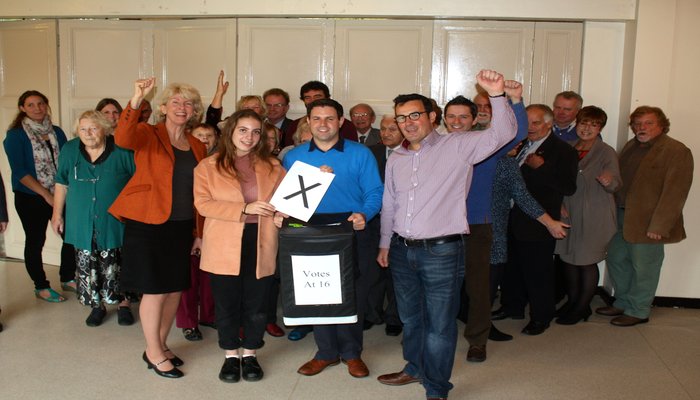