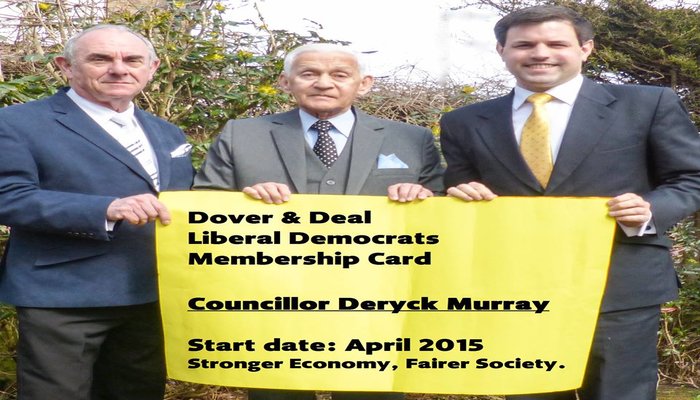 Good news from Dover and Deal as the Mayor of the Town, Cllr Deryck Murray resigns from Labour and joins the Liberal Democrats.

My political hero is Vince Cable.  He always makes sense and answers questions.  He listens patiently and wins the argument.”

The Liberal Democrats have had a fabulous influence on this government and made it more compassionate and humane.”

Locally neither Labour nor the Conservatives can make a difference.  Some Labour councillors rarely read the papers for council meetings.  Local Conservatives waste time and public money making silly complaints that aren’t upheld.”

The local Liberal Democrats have impressive, capable people and our town is worse off for not having more of them on the council.  I hope they will be on the council soon.

We are very pleased to welcome Deryck Murray to the Liberal Democrats.  He is dedicated to the people of Deal. The Labour Party trades on the past but has no vision.  We hope that many more people who have previously supported Labour will help Liberal Democrats build a brighter future for Deal.

Tim Farron also welcomed Deryck and encouraged others to leave Labour and join the Lib Dems.

I was thrilled to hear that Councillor Murray has joined us.  I believe he shares my commitment to social justice.  In government, we have cut tax for the low paid, brought in the Pupil Premium to help school children and created jobs.  I hope more people will make the journey from Labour to the Liberal Democrats.

Local PPC Sarah Smith looks forward to having him on her team:

As Deal’s prospective MP I am delighted that Deal now has a Liberal Democrat mayor.  I am looking forward to campaigning with Councillor Murray.  I know that he particularly cares about Deal Hospital and local services, and so do I. When I am elected, I will be able to work with him for the benefit of local people.

We also welcome Deryck to the party and hope that many of you will, too.