The Liberal Democrats won all four of the council by-elections that were held last night, gaining seats from the Conservatives, Labour and UKIP.

The sweep of victories means that the Liberal Democrats have gained seven council seats in November, significantly more than any other party.

The Liberal Democrats, under Vince Cable, are winning seats up and down the country and against all opposition. 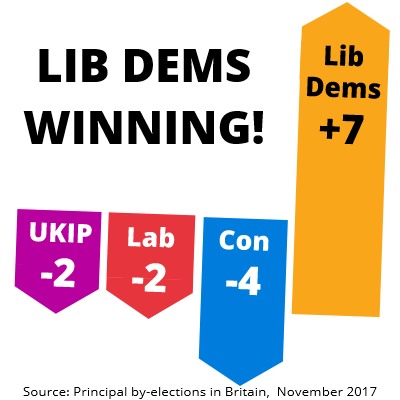 Our local campaigning is second to none, and the hard work of Lib Dem councillors and activists is being recognised in surges of support in by-elections across the country.

💪 Gaining from the Conservatives

With the 2018 local elections just around the corner, the Liberal Democrats have never been more up for the fight.

Your support today could make the difference in those elections. Contribute today to help us win in May, by clicking here.