On Saturday Liberal Democrat members gathered in central London and across the UK, to March for Europe and for an open, tolerant and united country. 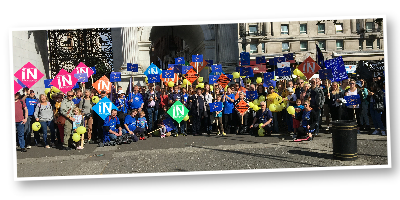 The Liberal Democrats were the only national political party with any organised presence at the march, and numbered about a third of the total marchers on the the day - indeed, there were so many of us we received our own police escort!

Armed with placards and balloons, and led from the front by Sal Brinton, Catherine Bearder, and Sarah Ludford, the march wound its way down Piccadilly through Trafalgar Square before ending at Parliament Square.

Along the route, Lib Dem leaflets flew out of members' hands and they were all cheered along the route to chants of "We love you EU" and "We don't want Brexit". 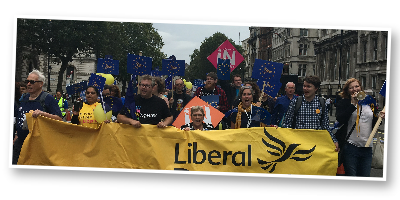 Arriving in Parliament Square, the group heard further speeches including from our very own Catherine Bearder (which you can watch here).

It was a fantastic march - and demonstrates the widespread strength of belief that the UK should remain an open, tolerant and united nation at the heart of Europe.

The Liberal Democrats also proved once again that we are the only real voice of opposition to the Conservative Brexit Government.