The Liberal Democrats have named Andrew England as their candidate for the East Brighton council by-election being held on Thursday 4th August.

Andrew is a dedicated and long-serving member of the community. He has taught Chemistry at Roedean School since 1978, becoming head of department in 2006, and was Junior Organiser for Sussex Women’s Cricket Association for ten years, where he established the u21, u19, u17, u15, U13 and u11 age group teams. If elected to the council, Andrew will work to ensure excellent standards of education within the ward and will promote tolerance across the city.

He says of his candidacy: “I am honoured to have been chosen as the candidate to represent the Liberal Democrat Party in the East Brighton by-election. East Brighton has three primary schools rated ‘good’ by Ofsted: St Mark’s, St John the Baptist and Whitehawk City Academy. As a teacher, with two of my children at one of these schools, I want to ensure that all children get a top education. Schools need to be fully supported by the council and funded adequately. Reducing funding when a school improves from ‘requires improvement’ to ‘good’ is not the answer. My number one priority would be to see that these three schools gain an Ofsted ‘outstanding’ rating and become the best three primary schools in the city.

Brighton and Hove is an international, outward-looking, tolerant, compassionate and cooperative city, and it was no surprise that over two thirds of the population voted ‘Remain’ in the recent referendum, a view held strongly by the Liberal Democrats. Our stance at the next General Election will be to argue to change minds and to change the decision, aiming to reform the EU from within. There is considerable support for this view evidenced by the fact that the membership of the Liberal Democrat party has increased by over 15,000 since the referendum.”

Frances Lindsay-Hill, who has previously served as a councillor in Brighton, has endorsed Andrew’s candidacy. Speaking at a recent Brighton & Hove Lib Dem social event held to welcome new members, she said:

“Andrew has a deep understanding of our diverse city, its problems and its benefits. He will bring an intelligent and balanced view to the council, contributing some common sense to often ill thought through decisions taken by the other parties.” 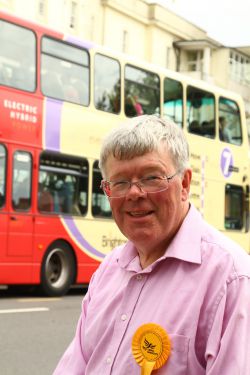