As Mark told us yesterday, Margaret Sharp has retired form her position as a Liberal Democrat member of the House of Lords. Yesterday she made her valedictory speech in a debate on poverty. She emphasised the importance of improving education, making the curriculum more vocationally orientated, as a tool to get people out of poverty. Here is her speech in full:

My Lords, I am grateful to the noble Lord, Lord Bird, for initiating what has proved to be a very timely debate, given the commitment made by our new Prime Minister yesterday evening. I applaud the work the noble Lord has been doing over such a long time with the Big Issue and with fighting poverty. I congratulate him on his determination to use his time in this Chamber to continue that fight

As noble Lords are aware, this is my last speech in this Chamber. I was introduced in October 1998, so I have served nearly 18 years and, as many noble Lords know, I am leaving because my husband has just celebrated his 85th birthday and I want to spend more time doing things with him: going to plays and concerts, travelling, seeing friends, reading books—not papers—and even perhaps watching television more often. In saying farewell, I want to say what a privilege it has been to be a Member of this Chamber over this time and how much I have valued the companionship and intellectual stimulus that it has given me. I would like to add a special note of thanks to the staff of the House: the clerks, many of whom I have got to know through work on Select Committees; the officers under Black Rod who are for ever helpful, patient and courteous; and the catering staff who have looked after me and my guests so well over the years. Thank you very much.

The subject of today’s debate is to take note of the causes of poverty. I have spent much of my time in this Chamber on issues of education, being a Front-Bench spokesperson for the Liberal Democrats between 2000 and 2010 and pursuing in particular the cause of part-time, further and adult education. It therefore seems appropriate that I should say a few words about education, or perhaps more importantly the lack of education, as a cause of poverty. This becomes increasingly relevant in this world of globalisation, where we observe a growing dichotomy between the well-qualified who hold down professional and managerial jobs and those with low or no educational qualifications who move in and out of low-paid jobs, often on zero-hours contracts and earning the minimum wage. Many call it the “hour- glass economy” and it helps to explain the phenomenon we see these days of poverty among those who are fully employed. As I think two other speakers have mentioned—the noble Baroness, Lady Warwick, certainly raised it—it is reckoned that 20% of UK full-time employees are in low-paid jobs and 1.5 million children live in families with working parents who do not earn enough to provide for their basic needs.

I first became conscious of how important education and qualifications were to earnings and prosperity when I worked in the early 1980s in the National Economic Development Office—as ever, pursuing the causes of the UK’s poor productivity performance. Even then the UK was notable, as an advanced industrialised country, for the very large number of its young people leaving education with low or no qualifications, and for the small number qualifying with intermediate technician-level skills. Industries that were recording chronic skills shortages in those days—engineering, construction, computing and digital technologies—are the same industries where we see the same chronic skill shortages today. It is surely an indictment that, after 35 years of skills policies, we are still failing to fill those vacancies with homegrown trainees and relying on skilled workers from other countries to fill the gap for us. Why, after all these years of education initiatives and increasing numbers gaining their five As to Cs at GCSE, do we, according to the OECD, come bottom of our eight immediate competitors in literacy and numeracy skills among 16 to 24 year-olds? As the noble Lord, Lord Empey, mentioned, literacy and numeracy are still a big issue in this country.

I tentatively suggest three answers to these questions. First, there is the failure to reform the secondary school curriculum, which to my mind remains too academic, modelled as it is on the old grammar school curriculum. We know that many young people find it easier to learn abstract concepts from practical experience rather than by cognitive reasoning, yet much practical learning has been banished from that curriculum. Too many young people end up demotivated by their secondary school experience, put off classrooms and learning and anxious to get out into the world and earn real money, but—and this is vital—with low expectations and aspirations. I thought the Tomlinson committee, set up in the early 2000s to tackle this issue, had the right solutions: to put the practical alongside the academic and allow the individual some leeway to mix and match. Recently, the Sainsbury review of skills training has come out suggesting the introduction of a strong vocational route as a choice for post-16 education. This is attractive, but it does not meet the issue of the demotivation of those between the ages of 12 and 16 in secondary schools.

My second reason for why we are not meeting these challenges is a cultural one. Vocational education is seen as second best to academic, as illustrated by the fact that, when questioned, 80% of parents thought apprenticeships were a brilliant idea but only 15% of them thought they were suitable for their own children. Many young people who are disillusioned with school will go on to further education colleges, but colleges are still regarded as second rank. It is absurd, given that they often take from schools some of the more challenging young people who need that extra year to take GCSEs, that they should receive less funding per pupil than their school and sixth-form counterparts and do not qualify for the pupil premium. As the noble Baroness, Lady Wolf, has shown so poignantly, for those who stay on at college after the age of 19 to pursue these sought-after intermediate and technician-level qualifications, average funding levels in 2012 were £2,150 compared with the average fees received by universities in that year of £8,400. If we really value these vocational qualifications, we must be prepared to resource them.

Finally, I blame the constant churn of policy—a complaint that is echoed in more or less every school and college in this country. We have initiative after initiative, the one introduced before the other has had time to bed down but undoing and making void all the efforts that have gone into adapting the first to the needs of the institution. Every time you rip up the foundations and build afresh, everything is on hold for a year or so. A prime example is what is currently happening to apprenticeships. The Government have cast aside the institutions—the sector skills councils, which used to set up the apprenticeship qualification requirements, or frameworks, as they are called—and instead have given employers the task of setting up a whole lot of new frameworks. Many of the new frameworks are still in the process of being formulated and accredited, and nobody seems to be clear about when they will come into play. At the same time, we are introducing the apprenticeship levy with, as yet, no clear guidelines as to how it is to operate or work. The result at the moment is quite chaotic and threatens to destabilise the whole system. It may work out, but there is huge uncertainty around it.

I recognise that the lack of education is only one of the elements causing poverty, but it is one which the politicians have found perhaps most amenable to policy manipulation. As an academic, I was classed as an institutionalist, which meant that I saw change more often achieved by evolution rather than by revolution. My experience in this House has reinforced this conviction. If we are to make a dent in current levels of poverty in the fast-changing world in which we now live, we need to improve levels of educational achievement. However, we cannot change things overnight. We need—in spite of all that Mr Gove has said—to heed the experts, to build on the foundations that are already there, and to be realistic about resources, bearing in mind that expenditures on education today, if well spent, are an investment for the future and for future generations.

This post was originally posted on Liberal Democrat Voice. You can view the article, here. 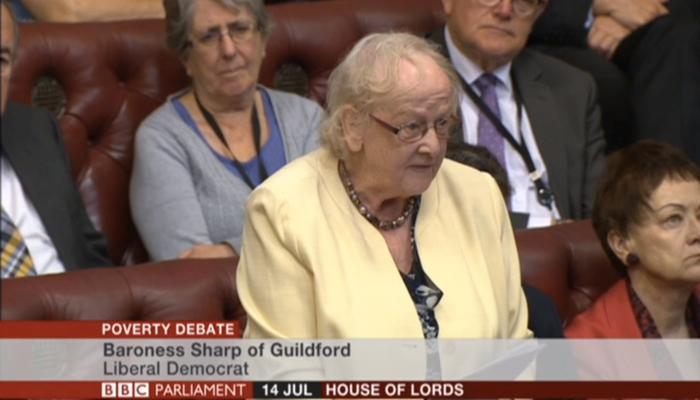